What Are The Five Stages Of Every Organization?

Several years ago I was in Nashville Tennessee meeting with a marketing agency. I had recently shut down Noodlehead Marketing and was exploring career opportunities. As the person interviewing me was describing the company and answering my numerous detailed questions, a sense of deja-vu came over me. I knew where they were at on the journey of business, and the stages that would soon follow.
It reminded me of frog DNA, from Jurassic Park. There are times when we don't have the big picture, and we infuse our own experiences and perspectives to help us put together the full picture of what's going on.
I took the story this company was sharing with me and I infused it with the knowledge of my seven-year marketing company's journey. In a sense, I had a predictive model for the process, not just marketing companies go through, but all businesses.
While our company was around less than a decade, we really did go through the race rather quickly and this quick pace acted as an important catalyst for accelerating my personal development. As I sat there listening to this interviewer, I could quickly point to the moments in my journey that had the same mileposts they were describing. And I got there in the same way they did.
During my years owning and operating our marketing company, I quickly realized the mistakes I made, the ways I hurt people, the success I had were all microcosms of what every leader faces. The more I realized this reality, the more I appreciated the opportunity to play in a small sandbox with my former company. I got to fail big in small contexts which is much better than failing in a public spectacle.
Marketing agencies and businesses of all types go through a predictable cycle. Some are larger, slower and less adaptable, so their journey through the process takes years or decades. Other small and more learning oriented leaders are quicker to move through this process. But either way, there is a series of milestones these companies face during their lifetime, and it seems they can be pinpointed and predicted with a good amount of accuracy. 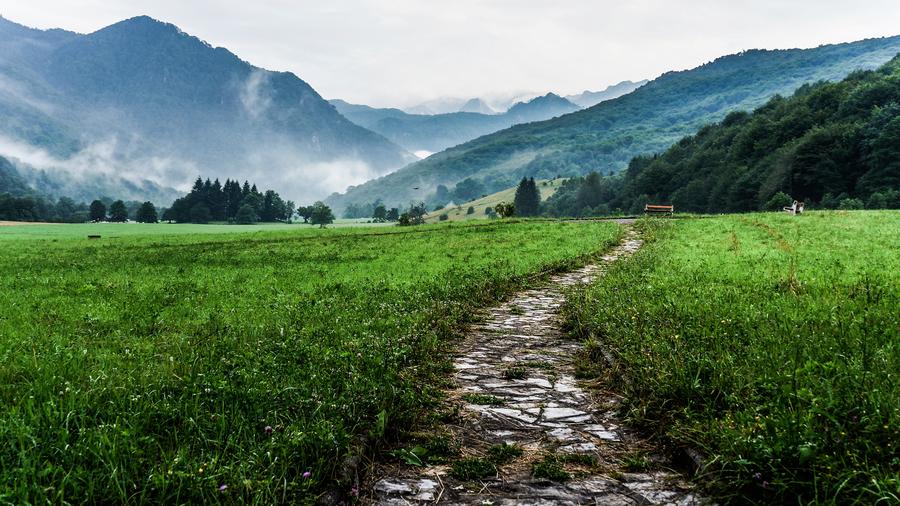 The model that best describes this journey is based on IDEMA, the framework for capturing and sustaining ideas. When we (Me, Beth Coetzee, & Len Wikberg) first developed IDEMA, it was built through the lens of projects.

What is the lifecycle of every project?

It was created out of a desperation to manage our projects by a team of flawed people. If you're not familiar with IDEMA, let me quickly recap the five stages in this framework as described on the project's Medium.com page to catch you up. 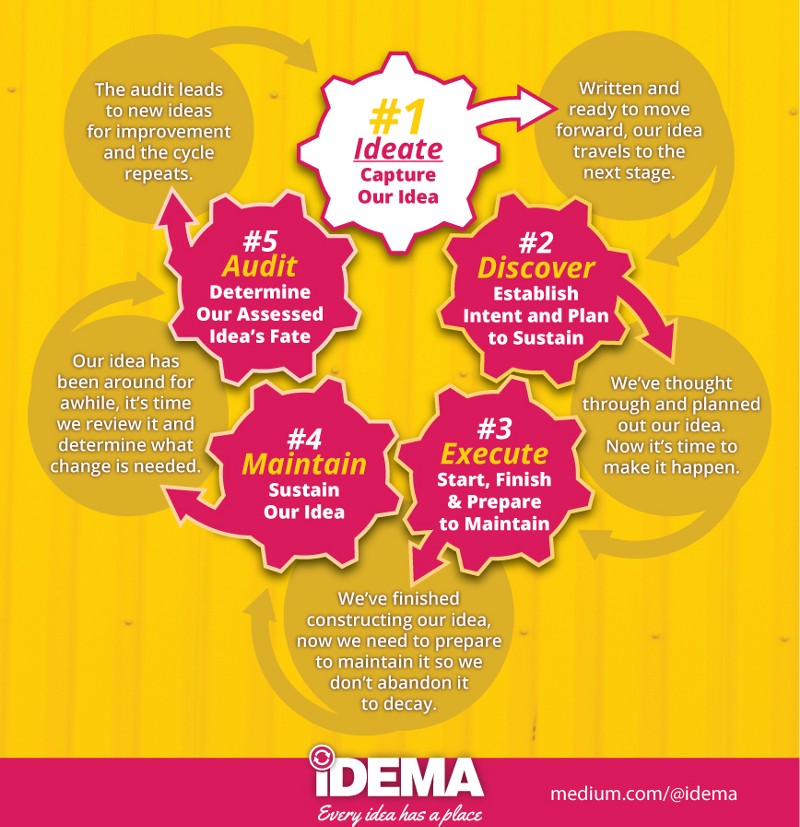 While this accurately depicted the journey of every idea and project, we soon came to realize this was also the story for businesses. While these five stages start out as a linear process, a company that lasts a lifetime, and even multiple generations, is one that learns to change this process from linear to cyclical. Here's how these five areas intersect with companies as part of their journey. 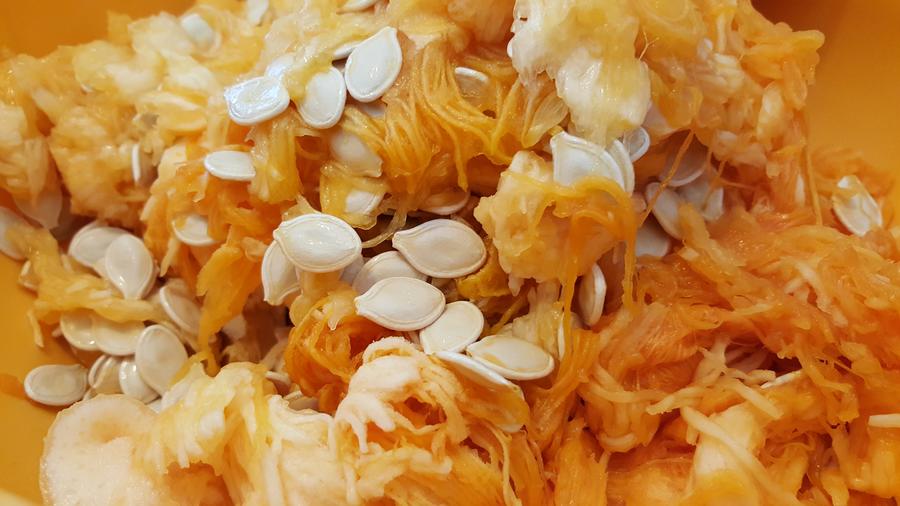 #1 - The Ideate Stage - Capture Our Idea

All companies start out as an idea. In fact, before we launch our company, we'll have an abundance of ideas we mostly forget about. These ideas come and go until one day, we decide to start capturing them. This is the moment when the idea goes from a fleeting thought to a captured concept. This is the point where we see the potential and completely ignore the realities that may prevent it from happening. It's also the point where we decide to take ownership of the idea and move it forward. I imagine this as a seed to a vegetable plant in our garden. We've got it and it can be planted to become something great. But if we simply collect a jar of seeds, nothing will ever come from them.
This is the downside of the Ideate stage, an abundance of ideas. The true mission of this stage is to metaphorically plant these seeds. This is the moment we commit to exploring the idea and our intentions further. It's this checkpoint that moves us from the first to the second stage. Discovery. 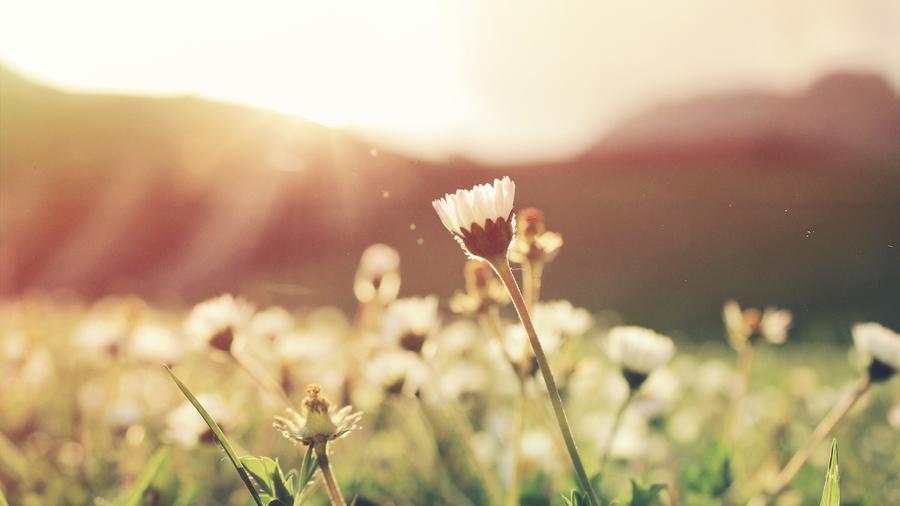 Alright, we've got a business idea and made the decision to move it forward in the process. Now what? This is the time for research and exploration. What was the origin of the idea? What are the potential payoffs if our idea leads to success? And, what resources do we have to incubate and bring this idea to life? These are just a few of the questions we'll be exploring in the Discover stage. For some, the questions lead to a zealous jump into the next stage. For others, they'll end up asking so many questions they get paralyzed as they prepare for the jump they'll never actually make.
The key with the Discover stage is not to just find the potential and leap or to see the potential and figure out every last detail. The important step in this stage is to take the idea through a deliberate process for determining the viability and feasibility of making this business work. These two factors are going to be highly influenced by each of our contexts. Some will have more opportunity for higher risk while others will not. The better we plan, the more accurate our expectations and reality will match. However well or poorly we've planned, we must eventually make the jump from planning to execution. 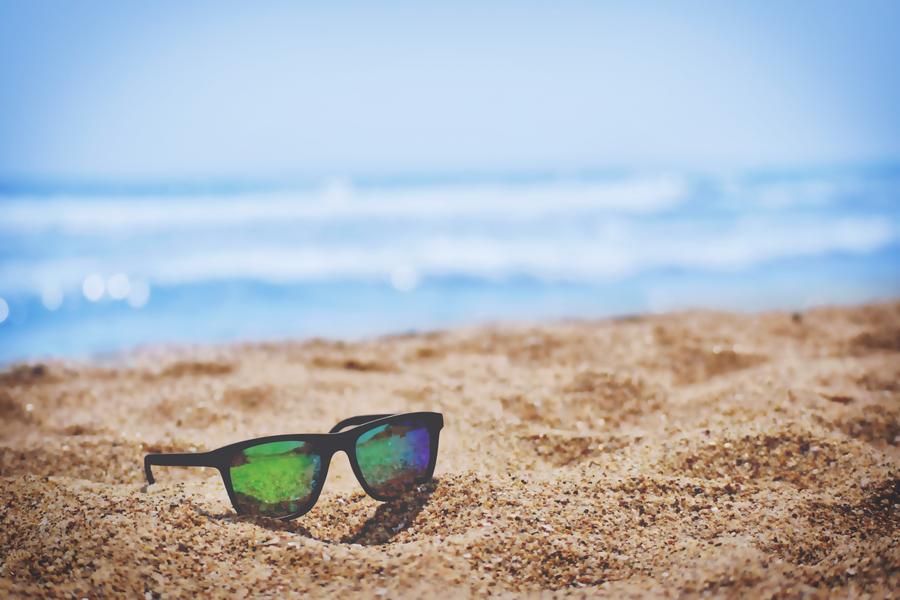 We've got an idea, we've thought it out and now we're going to bring it to life. This stage is where we take the red pill and move out of the dream world into the real one. Out of excitement and passion, we start creating. In this stage, we can go too far and end up over-committing to more than we can realistically manage well. We attempt to juggle these projects, but end up not doing anything well. We also find ourselves not sticking around long enough to finish what we start or allow the work to bear the fruit it would over time.
The key with businesses in the execute stages is discipline to finish what was started and not commit to more than we can handle. Once this habit of completion is formed, the second key is planning to sustain during the finishing leg of each project. In a world of decay, things require maintenance. Without sustaining, any success we have will eventually fade away. Once we learn to master this second key, we'll move into the next stage. 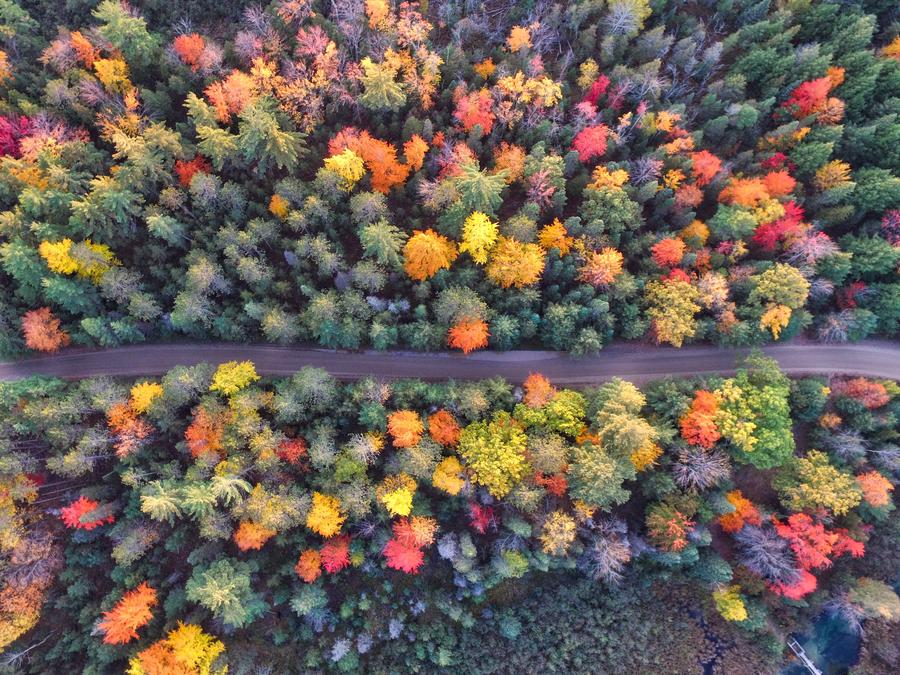 #4 The Maintain Stage - Sustain Our Idea

When our business has arrived in the maintenance stage, we've learned to finish and we're planning to sustain things we create. Over time, this leads to a bloated company. We keep gaining weight without losing any. Bloated companies cannot adjust or move like they need to in order to survive & thrive. Eventually, they get caught in the bog, slow down and fossilize. It's like standing in concrete. Once it's dried, it's going to be extremely difficult to move forward.
The key for organizations in this stage is to remember, we can't always rely on our past success and anything we maintain needs to be regularly updated, otherwise, it becomes obsolete. We must inject a cadence of review and improvement. We need to shed those pounds and prevent ourselves from ever becoming bloated or fossilized. Once we've embraced this additional ingredient of auditing, we move the fifth and final stage of our business. 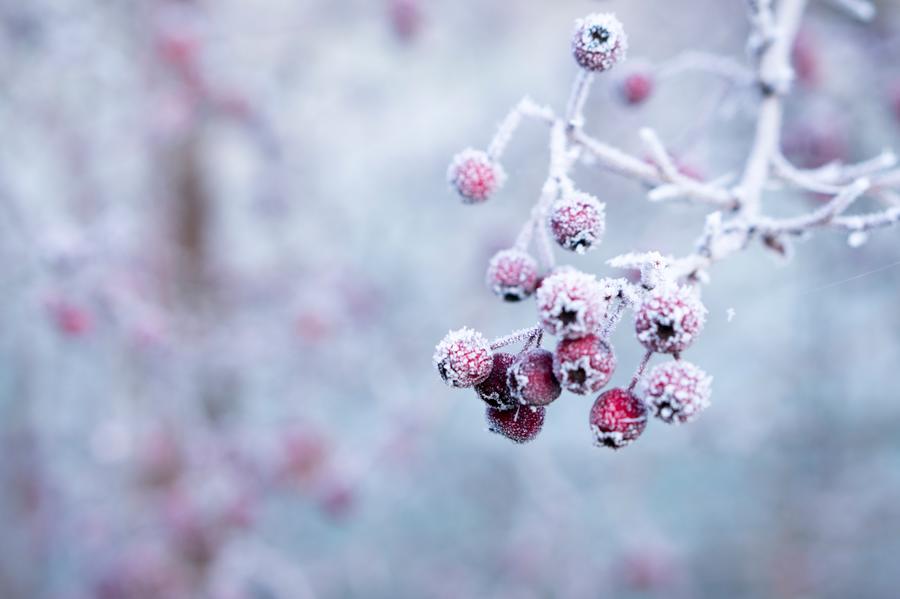 Companies that make it to this stage can operate in the full IDEMA circle (if they recognized the cycle). They're reviewing projects, departments, and people to constantly figure out how to make it all better. If we can't improve it, or justify keeping it as is, it's time to end it.
Keep, Improve, or quit? That is the question we ask. There are no sacred cows and everything must have a purpose. With a culture of auditing, we ensure we're as lean and simple as possible, while also remaining effective and relevant. How do we create a real-time feedback loop on all things and people for optimal performance? That is the goal for companies in this stage.
Unfortunately, when we first enter this stage, our company is bloated so it takes time to shed the fat and get it back to where it needs to be for effective operations. Once we arrive at this high level of performance, we sustain these review systems to ensure we don't ever go back to the bloated state we were once engulfed.

What Stage Is Your Organization Currently?

If you've owned and operated a company for an extended period of time, you'll recognize this accurately describes the lifecycle of your company. When we don't understand this cycle, we traverse through it over and over feeling like we're living out the movie Groundhog's Day with Bill Murray. But, when we see and embrace this process, we can proactively engage in it to manage the weaknesses and leverage the strengths.
Where in the journey is your company? 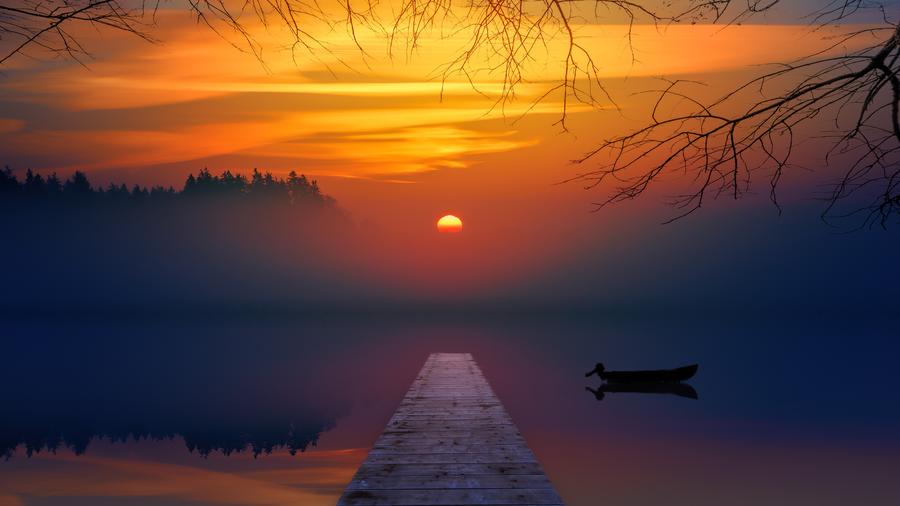