My 2019 Mid-Year Checkpoint Plus My Massive Collection of Quotes

It happened. We’re now over halfway through the year 2019.

Unlike last year, I’ve pulled back from the pace at which I reflect back and look forward (at least in writing them on this blog). This created space contributed to my focus on finishing the repayment of our student loans, and the completion of my next book.

And, it allowed me the energy to work on writing out my second longest article ever (The first being this one about the Last Jedi) as I reflected on the college repayment journey.

This student loan completion step is part of the creation of our new life. On top of rebuilding my career and building a strong financial foundation (while writing two books,), we’ve also bought a house, purchased a minivan, had two MORE kids (five total), and switched churches/communities.

This was done in five years, which is a bit baffling (and awesome) considering we were financially starting from scratch to make it happen. God was doing a great deal of the heavy lifting, and I'm super grateful because it's been hard even with His direct and indirect influence.

For the remainder of this checkpoint update, I'll revisit the initial goals set up for the year in January, the progress I've made (or not made), and a series of quotes I've been collecting. Let's start with the completion of a major financial milestone.

We finished paying off our student loans!

But, like wearing a heavy backpack on an extended hike, it takes time to feel the burden completely lifted.

The emotions of the accomplishment seemed to have peaked a few weeks after as I broke down crying (with appreciation, sorrow, and overwhelm) while visiting one my client's offices. It was an unexpected and positive experience.

But as the weight of this milestone has become more visceral, the emotions of both its relief and implications (anguish from the reality of the decisions we made) both surfaced. In a moment of panic, I felt as if life going forward would not change and I’d be carrying this burden without relief indefinitely (an unending punishment). I had hoped for a better future for myself, my marriage, my family, and community.

It turns out, I’m wrestling with my earlier self, the version of me who started this journey. I'm conflicted with his choices in life. While I’m glad to be a better version of me now, it's created some tension with the past version of me. Reconciling the two while also demonstrating grace and appreciation for past me is no quick task. As the difficulty of this challenge fades with time, and I rest and rejuvenate from the toiled path, I suspect I'll be able to view and reflect on it with much more generous eyes.

But, while this marks a major milestone in this closing chapter, there's one other major moment that seems to be the final door to close as part of us moving into the new future we've helped create and embrace. The self-publishing of my second book. 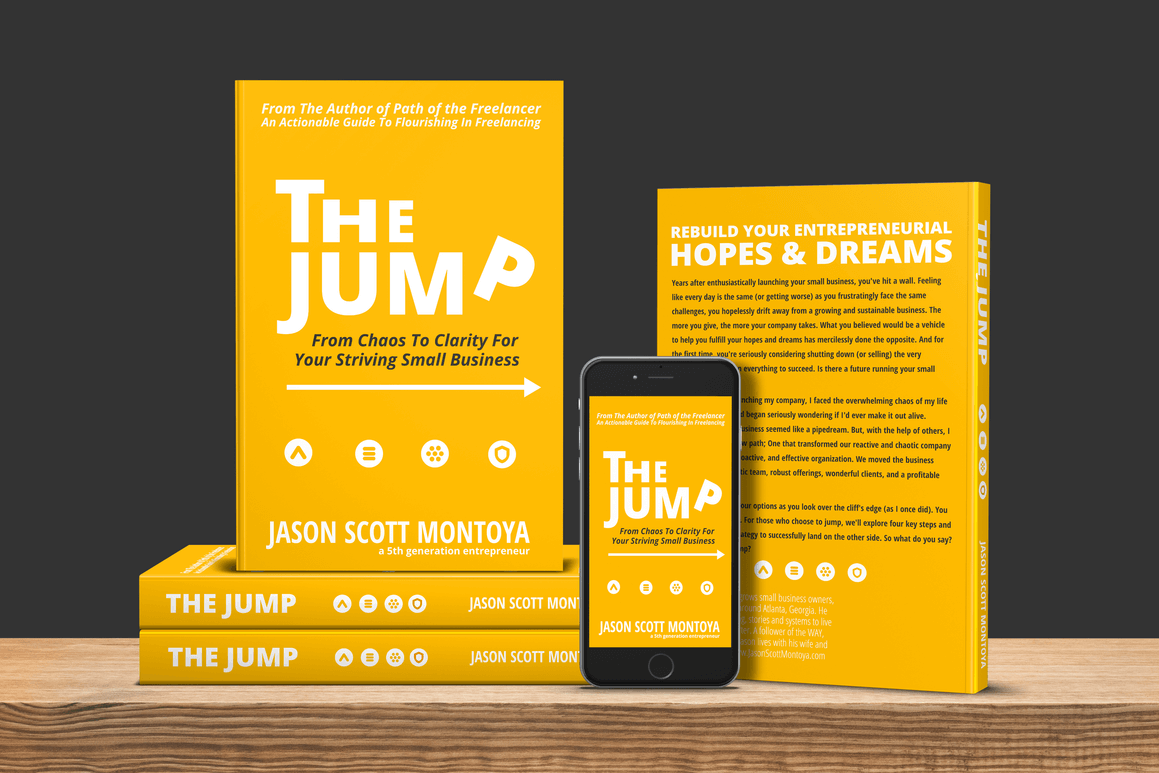 Book Progress With The Jump

In the mentioned emotional breakdown from the previous section, it was a friend who made the comment about how publishing the book was symbolic of me making the Jump. I not only was writing about the process but was also demonstrating the change in my own journey.

I have made the jump.

Publishing this second book will be a symbolic step in the conclusion of this current chapter, and further healing and clarity form the previous one.

The Jump is a book about both my journey with Noodlehead Marketing, but also the one working with other small business owners that followed.

On a practical front, the book has helped me to codify my offering, while also building credibility working with entrepreneurs.

I've also begun working on the landing page, which will live here on this website (as opposed to living on another domain). The physical book is now available for pre-order on Amazon.

In regards to the actual publishing progress, I'm now in the middle of a small break working on the book’s manuscript. I’ve read it numerous times making tweaks and improvements. I’ve also had several folks read and provide feedback to make it better (if you’re interested in joining in, let me know).

The book is now near completion. I’ll revisit it towards the end of the month, run it through Grammarly (affiliate link), and do a final read of it physically with all my new graphics (being created during this editing break).

Thankfully, freelance work (although I do have an opening of 20-30 hours this month in July) has been steady and a terrific vocational path to earn a great income and deliver strong value to my clients.

With the student loans coming to a close, there was fear things would turn south before we could finish the task. Now, if that happens we've got significantly more margin to work around the unexpected.

With an amount of work on my plate to meet and exceed my monthly and annual goals for freelancing, I've been stuttering just short of the goal of 117 paid client hours per month. I'm averaging 112, five short. Part of this is due to me now strictly ensuring I take one me weekday off each month. But, it's also the wear of the student loans, the lessening of pressure to succeed, and the additional distractions.

I'm curious to see how this trend continues in the second half of the year, and whether I'll have more or less energy to stay focused and hit these top tier goals. Publishing the book will be part of the challenge to juggle this all.

An additional update about my freelance offering is, tightening the screws on what it is I'm offering my clients. In evaluating what value I bring to the table, and how this unfolds over the next several years, I've identified two areas I'm focusing on with my clients; growing platforms and people.

Here's what that means within the context of growing income, teams, and founders from the inside-out.

This takes what I've currently got on my services page, and further consolidates it. It also highlights and positions these elements in a way that taps into my strengths and experiences while also paving the future path.

From the start of the year through the middle of May, I've consistently published new blog posts here, but since then this will only be my third post putting my back to about a month per article. This has created a month-long break between my last May post, and my June post about the student loan completion. I'll be interested in adding data about how this affected my Google rankings and traffic between posts.

Over the next few weeks, I suspect my blog will receive less action, but as I get closer to completion of the book, and the promotional materials, I'll shift gears towards promotion. When that happens, I'll be gearing up the activity here on the blog.

While my goal with all side projects, including the blog and book, is to contain my time working on them into my blocked off work day, I've made progress but I'm not quite there.

And, I have been testing out several content distribution ideas, some of which have fostered some fruit, but all of which require a bit more time to make happen, and to collect data for review.

Checking In On Other Goals & Changes

With the main things out of the way, let me provide a quick update on the other goals and a few more changes worth noting here.

With over six months since I've last shared my collection of quotes, I've got quite a slew of them for you. Check out the numerous quotes below as my final send-off for this update.