Are We Using People To Achieve Or Helping Them To Develop Character? 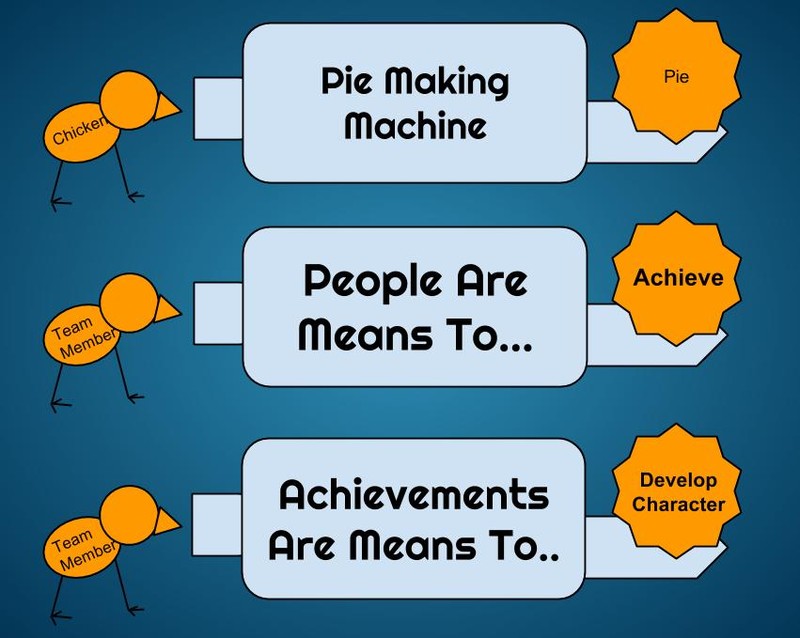 In the movie Chicken Run, the chickens are not producing enough eggs so the owner, and also the villain, decides to buy a pie making machine. As you see in the first part of the graphic above and the video below, chickens go in and pies come out. The magazine in the film, inspires the villain in the movie to buy the pie maker. She believes this machine will turn her failing farm into a money making machine.

The Trap For Leaders

As a business owner striving for success, we can easily fall into the trap of seeing our team members as the chickens in this analogy. Team members go into our company, the pie machine, and out of it comes what we define as success or achievement. Money, power, fame, influence, are a few examples of how we measure our achievement.

In this mindset, the team is not a top priority and we can see them as a commodity making it really easy for us burn someone out knowing we can find someone else to take their place.

As a team member, we are not immune to this trap either. In fact, it is usually the leader who is seen doing this while the followers escape the accountability.

Followers can look at the company and its owner as our personal pie making machine. They become the means to help us accomplish our goals without regards for their relationship and our commitment to them.

While seeking to achieve our goals and teaming up with others to do so is not itself a bad thing, the tension arises when the achievement and the relationship become at odds. It is these moments which quickly illuminate our order of priorities, and we learn whether achievement or people are our top priority.

A few years back I worked with a company I'll refer to as Company A. While working with them, I observed a high level of this achievement oriented focus. While it was present, the good news is that there was an intentional shift away from this mindset and behavior. With that said there were still situations where people in different ranks in the company were using each other as a means to achieve or accomplish their respective goals and less emphasis on character and relational growth was present.

There are three stories I share below, two negative and one positive, demonstrating this dynamic. I share to help illuminate this tension we all face.

How Bob The Tornado Disrupted Everything

Company A was owned by Bob The Tornado, my fake name for this real situation. Going back to our Pie Making analogy we will enter the story with Bob’s perspective. BOB started COMPANY A, and he spent a lot of time creating and accumulating a lot of great pies. In his mind, these pies were part of his greatest achievements. His hard work and livelihood was based on these pies and what they represented.

He took a break from making these pies and went off to do other things. When he came back, some of his most prized pies were a mess and there were a bunch of new pies he did not want made. He was furious and in that moment he foolishly attempted to fix the broken pies and get rid of the new pies at the cost of the relationships with his team. Fixing the mess was more important to him than the people he was hurting by fixing the mess, and it  was at this point he revealed to the world that his achievement was more important than people. When the team confronted him about this issue, he realized how his priorities were out of order and apologized for the way he acted.

Let us rewind and look at this situation from the perspective of the team. While BOB was gone, they spent time and energy creating their own pies. When BOB returned and started changing things, their immediate reaction was more about protecting themselves and their new pies and less about BOB as a person and their leader.  BOB was now in the way of what was important to them and they wanted to get him out of pie making so they could continue making their pies without his disruption. When Bob confronted his team about the issue, they realized he had justifiable cause to be upset about the neglected pies, and they needed to all get on the same page about which pies they would make and how they would take care of them.

From my perspective, the issue was the same on both side, it just looked different. In the future it would have been wise for BOB to follow the appropriate channels to communicate his frustration and concerns. For the team, it would have been wise to respond to the chaos with an intent to listen to BOB. Ultimately, in a messy kind of way this all happened, but if one or both sides prioritized each other first, it would have played out with much less chaos and negative consequences.

How Sam The Giver Prioritized His Team Above The Company

Our second story is the story of Sam The Giver and Company B putting people above achievement at a steep financial cost.  This story is shared from the perspective of one of the team members with names changed to maintain anonymity.

“This morning, we had our annual insurance benefits meeting. It started off somberly - we were almost immediately informed by our representative that our insurance rates were going up 51%.

It was tense. However, at this point, our CEO came up and began explaining a few things. After stating his case, he dumped an absurd amount of cash onto the desk. He told us his company would be absorbing the 51% increase across the board. Our personal rates wouldn't be going up a single cent.

One of our Core Values at my job is "Do the Right Thing". Sam The Giver and the leadership team abided by what they felt was right in a mind-blowingly sacrificial way. Thank you, COMPANY B, for always setting such a high standard and example for what it means to be the most selfless people that we can be.”

How, For A Moment, My Dad Prioritized Achievement Above Our Relationship 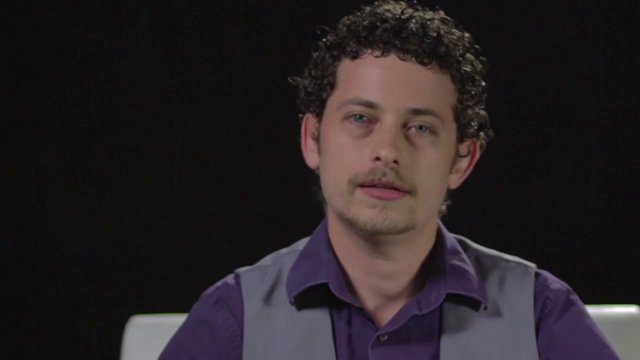 Being on the receiving end of this performance oriented dynamic has been a common trend in my life. Unfortunately, others have prioritized achievement above me in many cases including, in some cases, my dad. If you have watched my video story, you will be aware of the oil change situation I describe below.

My dad owns several FedEx Ground routes and in High School I would help him install shelves and do maintenance on the trucks. One time while I was helping him change the oil, I was not paying attention and made a mistake.

The oil from the truck went all over the Fedex complex floor. It was not as bad as the Deepwater Horizon oil spill, but it was still bad. Oil was everywhere and it was probably going to take all afternoon cleaning it up. As you can imagine, my dad was visibly upset and he expressed this to me. From his perspective, his work was really important and he was putting in a lot of time. Now, I just added more work to his already heavy burden.

Being sensitive, I received his verbal chastisement personally. From my perspective, I did not mean to do it and I was more than willing to clean it up. There was no need to get upset at me. It was then I hoped he would have prioritized me above the work. I felt terrible enough on my own, I didn’t need help feeling bad. I wanted to receive compassion, and for him to come alongside and help me clean it up. When emotions settled, we did clean it up together and he probably did most of the work, but the initial emotional outburst seared my soul. My dad never imagined how much this achievement dynamic in our relationship would have affected me for years to come, but thankfully, we reconciled over the years working towards a stronger and more open relationship. 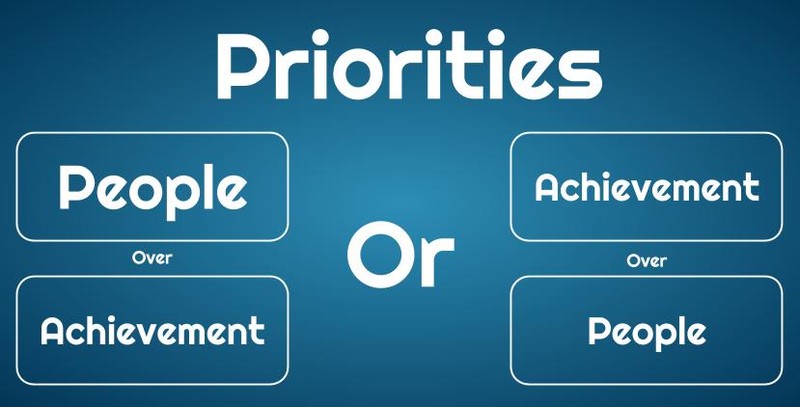 When it comes down to it, people matter and our relationship with them is important. This insight and these stories are shared to help educate and inspire you to prioritize people above achievement in your life. If you'd like to prioritize this way, I've got some practical steps and resources to help you intentionally live this out in your personal and professional life.

Keep in mind, while this may be an issue we can learn and be aware of, it will likely be a lifetime tension we face. Maintaining priorities is hard, but being aware and accountable is a powerful step in minimizing its effect on our lives.

Cues We Can Use To Keep Our Priorities In Check

The following are mental cues I have found to be helpful triggers for when our priorities are out of order.

Videos & Activities To Help Us Anchor These Concepts

The following activities and resources will help us in navigating and learn how to minimize this trap’s effect in our lives. Take the next few weeks or months to review the following.