Leading On Business: Can You Still Be Kind To Others And Succeed? [For BEALEADER]

Recently, a friend expressed his frustration with being too nice in his business. Out of his niceness, he believed people took advantage of him, and he was beaten up by the world. This was a sentiment I related to deeply.

During our conversation, I saw what it was like to be on the other side of me when I was in the same hurt state. It brought back the memories when I asked myself if I could be successful and still be nice in business. As I think about it now, I remember milestones in my journey where I had to go to dark places to survive and move forward with my life. There were team members and clients who preyed on me, and there was not a safe place to retreat.

There is a scene that comes to my mind from the 1995 film Casino, by Martin Scorsese. In the particular scene, I relate to, they take a guy to the cornfield. At the spot, they took him, was a large hole. As he is standing next to the hole, the surrounding mafia begins hitting him with baseball bats until he is just short of death. At this point, they throw him into the hole, where he is barely hanging on. It is at this point they began to shovel dirt on him as they bury him alive. In 2009, this image demonstrates how I felt.

It seemed like everyone had taken their bat to me, and I was barely holding on. On top of that, it felt like the surrounding chaos buried me alive. Here I was thinking I was helping others, doing my best, and nothing I did was good enough. I went to a dark place of despair in facing this reality. As my friend was sharing with me, it reminded me of this season of my life. He was beaten up, and like me, he had turned his heart off to stop the pain. It is in this state, we become a shell of who we once were.

So, how do we prevent ourselves from transforming from a nice, joyful, and loving person helping others into a cold, broken shell of a person? In other words, how can we be nice in business, not get beat up, and succeed?

It was the other day while I was watching Mary Poppins did the concise answer come to me. Early in the film, Mary Poppins is speaking to the father referring to his list of requirements in a nanny. One of his requirements is the nanny is nice, to which Mary Poppins replies “I am kind, but extremely firm”.

Kind and firm, just as she stated it. When we are kind and not firm, we get ourselves in the most trouble. We live in a world where people are going to take advantage of us. Often, we do it to each other unaware while other times we do it intentionally. Ideally, we are looking out for ourselves and those we interact with, but often this is not the case. When both people are not looking out for each other, it creates an opening for us to get hurt.

Deciding to stop being a kind person because people have been unkind to us is a tragedy. Doing so continues the cycle unkind people perpetuate. Instead, we ought to choose to be kind to others knowing there will be times when they treat us poorly. Let’s not have external forces define us, but instead, let’s decide who we want to be and how we want to respond. Let’s also take responsibility and recognize it is likely our lack of firmness where we usually get hurt, not our kindness.

With this insight as our foundation, here are four principles to help us be more firm as we lead in our family, work, and community.

Prioritizing Our Values Above Our Need

We all have our needs, and our situation is much like that of a mouse. Mice need to eat in order to survive, and the mouse’s appetite for cheese makes a great enticement for setting up a mousetrap. The mouse has a legitimate need to eat, and as he goes for the cheese, the trap kills him. Most of this takes place with the mouse seeing the trap and being aware of it, as he goes into it. Like the mousetrap, I believe many of the situations where we find ourselves getting hurt have many red flags indicating to us we are going into a trap.

For me, this has played out with mentors, hiring people, finding clients, and working with vendors. One example for me was a friend/mentor who was in my life for several years. When this friend and I first connected, my wife and I had recently started a business and launched a political news website. Both of these ventures were new to me and I had little clue about what we were doing.

When this person came along, I needed support, guidance, and counsel, to help me navigate through the journey. He was also struggling in his life, and it was an opportunity to be kind and supportive of him. A big part of the problem was thinking I needed his help, and he needed my help. This became a catalyst to ignore the flags, and compromise on my values to get what I thought I needed. In fact, other people were telling me about these flags, and I even acknowledged them. I believed I could handle it, and I knew enough to know how to separate the good from the bad.

Now imagine the mouse dismissing the trap because he thinks he can get the cheese without setting it off. This sneaky arrogance and my lack of perspective and experience led to me getting caught in the trap. With limited perspective, I made this choice, and it cost me greatly.

When it comes to filling our needs, it is important we don’t sacrifice our values and priorities to fill our perceived needs. When we make this choice, we become kind and firm.

Operating From A Mindset Of Abundance

Another snag, which has caused me great grief, is operating from a mindset of scarcity instead of abundance. When we think and act in a way where we hoard, we become more defensive of what we have, and we are more likely to settle for dirty scraps instead of a nice meal. In the scenario above, there was a sense that I needed help, and finding it was hopeless. When it came to me, I grabbed and hoarded it because I didn’t know if something better would come along later.

There were times where when we hired people, we hired the best of who was available to us even when they did not fit the company culture and role we were looking to fill. When we sought clients, we accepted projects from organizations that did not align with who we were and with others who were not willing to work within our guidelines. Often, it was because we thought we needed the money, and getting paid became more important.

When we fear losing money, we allow others to treat us poorly. When we live with a mindset of enough, we are more likely to be firm in our interactions with others.

Stop Being Kind As A Way To Avoid Conflict

Historically, the conflict was something I avoided and ran away from. Tired, burned out, and desiring a reprieve, I did not want to deal with the many realities we faced in our early years of entrepreneurship. There were times when we were kind to a client as a way to avoid conflict. In some cases, our kindness was a reaction to their disappointment, while other times it was secretly done to avoid discussing an issue with them.

When a client hired us for 10 hours and they ended up using 15, there were times when we ate the hours and called it kindness. This created a few different problems. First, they usually did not know about our act of “kindness” and second, we became resentful towards them when their unkind behavior would not change. It felt as if we would give and they would keep taking no matter how much we gave. It felt like whatever we did was never enough.

In these types of situations, we needed to lean in and deal with the conflict directly. It doesn’t mean we are not kind or gracious, but when we learned to be accountable both ways, kindness became a more impacting and genuine gesture.

When we lean into conflict, it helps us to be firm.

What I and others have found, is we can be kind in business while dealing with others. To be kind, it is important we learn to be firm. Prioritizing our values above our needs, operating from abundance, and leaning into conflict are three powerful ways we can be firm in our dealings with others. It is from this path, where our kindness has the most impact on others.

Where are you being kind in your business? Where do you need to be more firm with others? 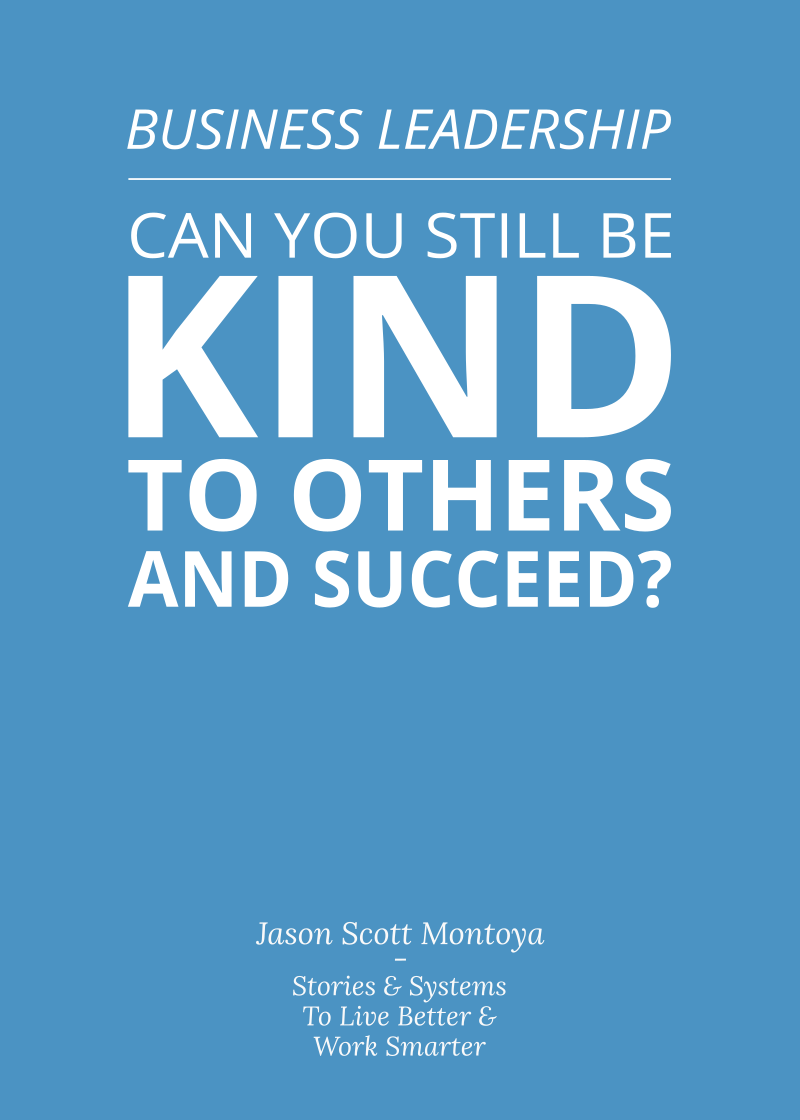 This article was originally published on BEALEADER

Photo by Redd Angelo on Unsplash