In the early years at Noodlehead Marketing, we found ourselves requiring more help than we could afford. An active consultant suggested increasing his engagement in return for partial ownership in the business. The potential of this idea opened me up to discover it, but instead of bringing me along, the consultant operated as if this proposition was a done deal. We never discovered, tested, or formalized the agreement. This set the stage for an inevitable poor ending.

At the conclusion of our working relationship (me ending it), this issue of ownership quickly surfaced. It was a messy situation ending poorly (we reconciled later).

In reflection, I sought to better understand what went wrong so I could better navigate my future commitments and partnerships. This exercise led to the following revelation of four stages we all go through as an idea moves from concept to reality. And, how our volition and actions are connected.

It turns out, we humans go through four distinct stages along the commitment spectrum. And by understanding them, we can more effectively engage with ideas and relationships while also helping to more effectively lead others. Let’s start by exploring the first of the four stages, the survivor.

The first stage is before we're aware of the potential of something new. We're committed at this point to what we know, and what we know excludes the new thing (person, venture, project, etc...). Simply put, we’re doing things the way we know how or how we’re instinctively wired. We’re surviving.

But somewhere along the way, an idea is introduced that opens us up to the possibilities. It's at this moment when we recognize there is potential in exploring what we don't know. When this happens, our commitment migrates from "what we know" to "the potential". This is the dreamer stage. Think of this as the research process in buying something, or when you're interested in pursuing a romantic relationship. As a dreamer, we’re exploring the potential of what this could become.

As we discover "the potential" we'll eventually find strong purpose, a reason for embracing and starting or testing that potential. We want to go from the dream world to the real world, but not the real world as it really is, the real world as we think it is, or want it to be. It’s in this place we become a visionary committing to intentions. Think of this as getting married, starting a business, or drafting a book. We’ve actually done something to bring to life the ideas in our mind.

As we embrace this commitment further, we’re faced with the reality (positive and negative) that entails the person we married, the business we launched or the book we began writing. While there was a purpose in making our decision, reality does not match intentions once we actually venture down the road. Embracing this reality is what’s required to reach a fully committed state (Achiever Stage). The achiever accepts both the negative and positive aspects of reality that goes along with staying married, continuing their business, or finishing their book and moves forward with realistic expectations of how to fully realize the vision.

“Integrity = The Courage To Meet The Demands of Reality.” Dr. Henry Cloud

These are the four stages of commitment which starts with what we know and the potential of something new, and eventually leads to starting and sustaining a full commitment to something (or someone) new.

A survivor endures, a dreamer discovers, a visionary starts (or tests), and an achiever finishes (or keeps/sustains).

There are simple tests to quickly identify your level of commitment to that project, relationship, or belief. Let's explore the first.

The first test is to identify if you are aware and attracted to the potential.

Have you thought about...

If you spent time exploring the idea but have yet to act, you're a dreamer. If you’ve never thought of or been interested in the idea, you're a survivor for that path.

In 2016, I had not considered the potential of leaving the church we had been involved with for the previous five years, but when we decided to buy a house, the potential surface. As a result, we discovered this potential as part of our first home purchasing process.

Finding out if someone is a visionary is also quite simple with the right questions. That dream you had, did you actually take any steps to bring it into reality? Did you start that relationship, begin writing that book, or launch a business?

Here's another way to audit the visionary. If you're a freelancer with no clients and zero dollars in the bank, what's your first thought? Get a job or find a client? If the answer is a job, you’re likely a visionary.

Several years into the Noodlehead Marketing journey, we were way overcommitted. I could easily say yes to everything and had a hard time saying no to anything. Finally, I wrote down a list of all the active and abandoned projects on our plate as a company. With a small team, I was astounded to see, in detail, just how unequipped we were to wisely manage what we had on our plate.

Visionaries are easy to spot because they have a wreckage of incomplete projects, relationships, and initiatives. When new more exciting ventures arise, they stop what’s in front of them and pursue it. Their chronic pattern of abandonment is a major signal for their commitment level. They lack what it takes to follow through consistently and say no to new opportunities.

Action and followup through are signs of an achiever. They’re like a dog with a bone that won’t let go. When we ask the achiever freelancer the question above, they’ll seek out the next client when money is gone and income has dried up. When a spouse is having trouble in a marriage, they don't think of a way out, they think of ideas on how they can improve themselves and the relationship.

Someone fully committed will keep going regardless of failure or success. A writer who doesn’t get the traction she hopes or expects keeps writing. In fact, an achiever writer would write if she was the only one to ever read it. An achiever writer also continues when he has succeeded. When the livelihood does not depend on the writing, this acts as another helpful test of how committed that person is to the endeavor or relationship.

These real achiever life-tests act as a way to identify if the focus of our commitment is the thing we say it is, or the benefits that come along with it.

When we’re interacting with other people, it’s insightful to understand where we and others are at in the progression. This understanding helps us know the wise next step and empowers us to facilitate, not force others along.

Let’s say two people want to launch a business together while but one is a dreamer and the other is a visionary. The visionary can help the dreamer discover the details she’s missing to move to the next stage.

When it comes to pursuing our ideas, including aspirations and hobbies, these stages can help us move forward and set up accountability with people who love us. We usually can’t move forward on our own.

Ultimately, the possibilities are endless with how you can leverage this insightful little tool called the four stages of commitment & connection.

These four stages are the undergirding foundation of the Island Story. If this system intrigues you, I recommend exploring the story and storytelling framework. 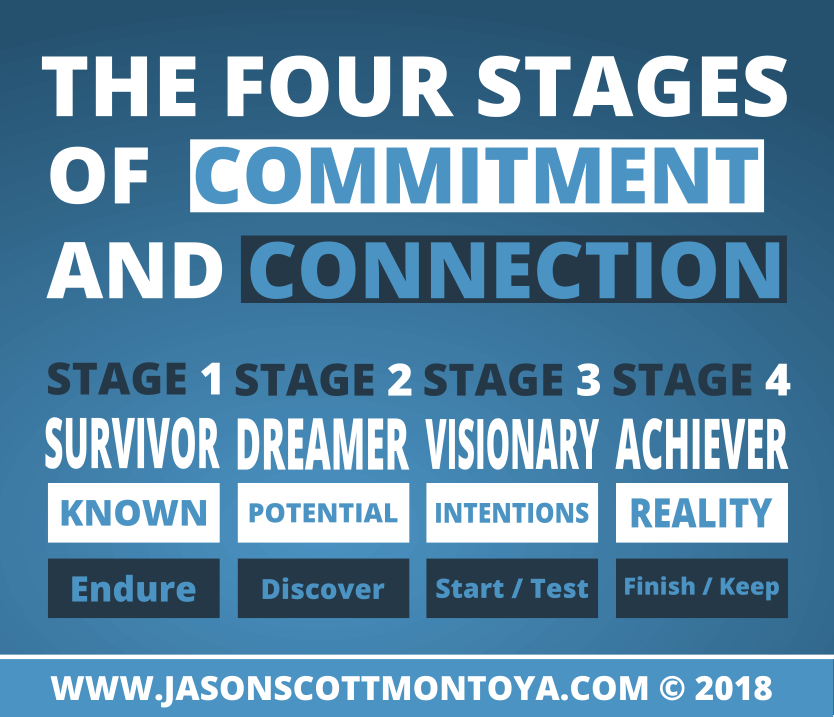 The Island Story, Stages of Commitment